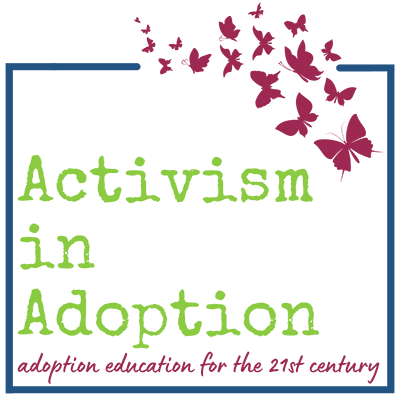 Ongoing support is important to enabling projects to continue their work, so we encourage donors to continue to contribute to projects over time. But if you must cancel your recurring donation, please notify us.
© Activism in Adoption

The False Equivalency of Adoption and Abortion 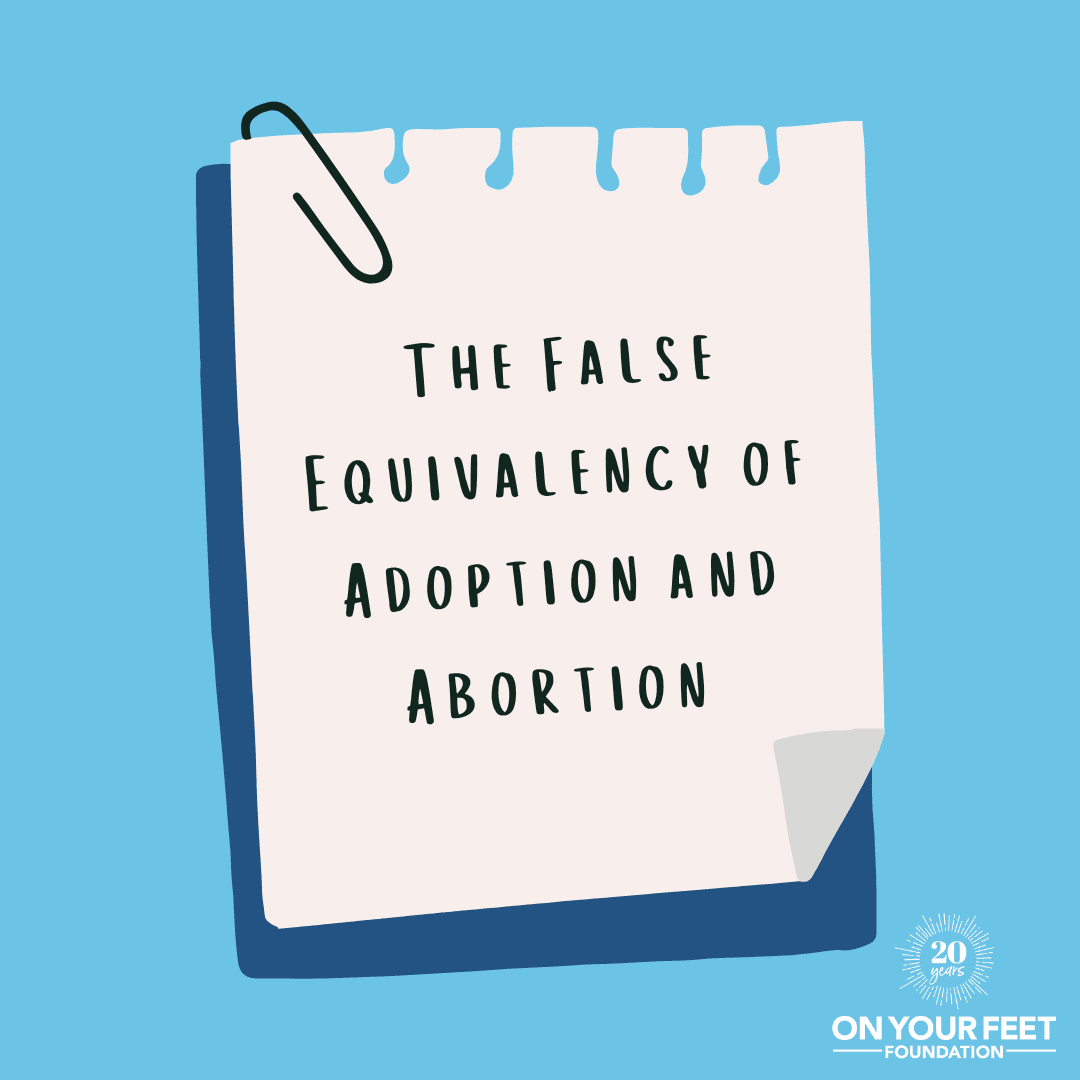 In December of 2021, Supreme Court Justice Amy Coney Barrett, when discussing abortion, suggested that we don’t need abortion rights in America because adoption exists as a viable alternative, signaling a shift in thinking that saw the overturning of Roe v Wade on Friday, June 24th, 2022. On Your Feet Foundation maintains a neutral stance on adoption, and as one of the few organizations or support systems in existence that are neutral, secular, and non-political, we are in the best possible position to educate others fairly and without bias. Maintaining neutrality is the only genuine response to supporting and advocating for birthparents, whose adoption experiences can range so drastically, because adoption is not a one-size-fits-all proposition.

However, On Your Feet Foundation has been providing that neutral, comprehensive post-placement care and support for birthparents for more than twenty years, and we know how adoption impacts them, not just at the moment of placement, but for years and even decades afterward, and we know that comparing adoption to abortion is a false equivalency, one not rooted either in lived experience or empirical research.  Adoption is not a substitution for abortion.

The argument that adoption is an alternative to abortion assumes that adoption is a simple way to avoid parenthood, but people who choose adoption for their children are still parents, even if they are not raising their children. They form deep bonds with the children they carry, and placing those children causes significant trauma. Barrett’s assertion assumes that birthparents feel no connection to their children, experience no grief, and easily move forward with their life, post-placement. We know that simply isn’t true, and our knowledge comes from not just our twenty-one years of listening to birthparents, but also in the academic research into the practice of adoption. In their book, Clinical Practices and Adoption, R.C. Winkler and colleagues concluded that, “empirical research has found that the emotional effect of relinquishment can be long lasting and includes confusion, anger, guilt, and sadness about relinquishing a child for adoption.” This finding is born out in research conducted by birthmother, author, and family therapist Sue Wells, who, when presenting at the world conference of the International Society for Traumatic Stress Studies, said this: "my own survey of around 300 British birthmothers suggests that their reactions of the loss of their children constitutes a trauma which may be lifelong. Almost half say it has affected their physical health and almost all, their mental health."

A common assumption about adoption is that birthparents do not experience any trauma as a result of making the decision to place their child, but we know first-hand from serving birthparents that this is emphatically untrue. There is a tremendous amount of cognitive dissonance in taking the position that a mother can love her baby so much that she would make an adoption plan and sacrifice her right to parent her own child,  but also assumes that those same mothers experience no trauma and no grief as a result of doing so. This cognitive dissonance forces birthparents to grieve in silence, their trauma and pain unrecognized in adoption culture. Bereavement expert Kenneth Doka coined the term disenfranchised grief to describe what it feels like to experience a loss that no one seems to understand or acknowledge, and that the bearer has no public support for. Disenfranchised grief is common in birthparents because the narratives our culture tells about adoption don’t recognize the trauma and pain they experience as a result of relinquishment. Birthparents are often left to suffer in silence, their pain exacerbated by the failure of others to acknowledge their profound loss.

That loss does not fade over time. Research shows that the more time that has passed since the birth mothers placed their child, the less overall satisfaction many birth mothers felt about that choice.  A birthmother may feel she made the right decision regarding placement and yet still experience ongoing feelings of loss and grief even years later. “As with time since the relinquishment, age of the respondents predicted an incremental decrease in satisfaction for every year they have aged," according to Dr. Elissa Madden. "It may be that the distance afforded by time, along with the internal resources and perspective that often comes with age, may have provided an opportunity for birth mothers to look back and reflect on what could have been."

Adoptees also carry profound trauma as a result of adoption. We know that infants are not blank slates; that they cannot just be handed over to strangers at birth and grow up without experiencing loss and grief. According to Nancy Newton Verrier, author of The Primal Wound, “severing the connection between the infant and biological mother [through adoption] causes a primal wound which often manifests in a sense of loss (depression), basic mistrust (anxiety), emotional and/or behavioral problems and difficulties in relationships with significant others… affect[ing] the adoptee’s sense of self, self-esteem and self-worth throughout life.” Dr. Marcy Axness, an adult adoptee and adoption therapist, describes it like this:

Research powerfully supports the idea that a newborn adoptee has a deep, body-mind knowledge that his original mother isn’t the same woman who’s holding and feeding and cooing at him. Many studies show that a newborn knows its mother and will work very hard to obtain her over anyone else. Throughout our childhoods, although this deep knowing prods us down deep, telling us that something is vaguely, intangibly askew, we come to embrace out of sheer survival instinct the acceptance that everything is “fine,” because that’s what everyone says, everyone upon whom we depend. We gradually become alienated from our own inner knowing, which not only leaves us vulnerable — without our essential “inner compass” of what’s true — it can lead to a hollowness inside, a hollowness that can’t be filled by the busy details of our lives.

Adoption is a trauma foisted on adoptees, who have no choice or say in the matter, and that trauma manifests itself in a thousand different ways over the course of their lives. We know that adopted children are almost twice as likely as children brought up with their biological parents to suffer from mood disorders like anxiety, depression, and behavioral issues and we know that the odds of a reported suicide attempt are about four times greater in adoptees compared with non-adoptees. Positioning adoption as an alternative reduces adoptees to props in political discourse while whitewashing the lifelong effects adoption has on them and ignores the work they must do to process that trauma.

At On Your Feet Foundation, we support birthparents every day, and we listen when they tell us about their lived experiences. While we can link to dozens of empirical research papers that make clear that adoption is not a substitute for abortion access, how expectant parents do make these choices is best summed up by Dr. Gretchen Sisson, whose research looks at decision-making in abortion and parenting, and who notes: “Women are not often choosing between abortion and adoption. Adoption is always the second choice to either parenting or abortion.”  Her findings are seen in the statistics on both options: “only 9 percent chose adoption—the rest decided to parent their child. It is telling that, among this group of women highly motivated to avoid parenting, 91 percent chose to do so anyway. They clearly saw abortion and parenting as their primary options, with adoption as a distant and far less favorable third.”

Given that three Supreme Court Justices are also adoptive parents, it is surprising to see adoption being put forth as an alternative to abortion in such a cavalier manner, ignoring all of the academic research dedicated to understanding adoption trauma, as well as the multitude of both birthparents and adoptees speaking up about their lived experiences within the adoption constellation. And nowhere has the Supreme Court addressed the lack of resources and support that so many birthparents cite as the reason they place their child for adoption, which is concerning because that lack of support continues, post-placement. Also not addressed is the complete lack of support and resources for anyone relinquishing under Safe Haven laws, or that those laws and options vary wildly depending on the state. For anyone watching the current adoption narrative play out in the press, we would encourage you to better understand adoption, including its long-lasting repercussions on everyone in the adoption constellation, and to seek out adult adoptee and birthparent voices, who are so often silenced in these discussions, to listen to, and learn from.